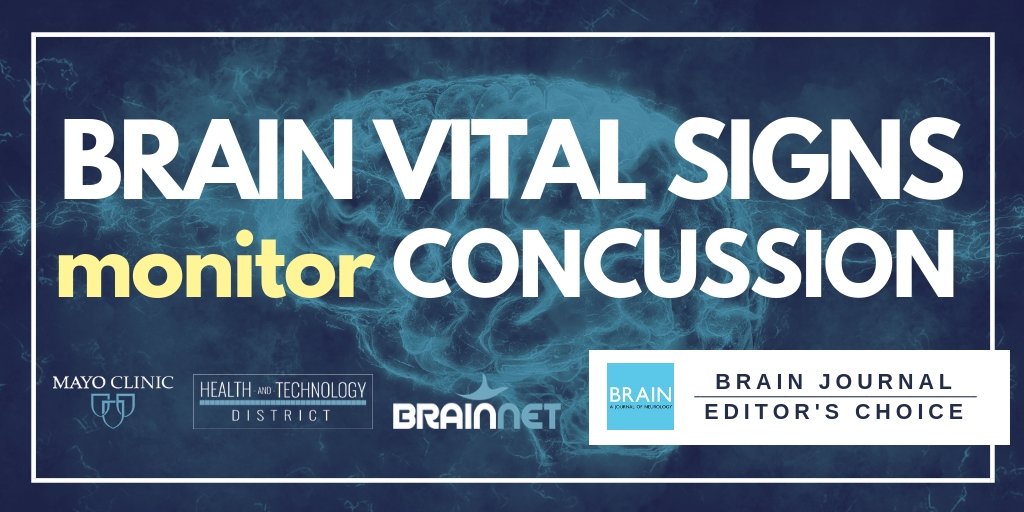 The peer-reviewed study is published online, and will be featured as an “Editor’s Choice” in the February issue of Brain: A Journal of Neurology (https://academic.oup.com/brain/article-lookup/doi/10.1093/brain/awy317), published by the Oxford University Press.

The research team found that brain vital signs detected neurophysiological impairments, such as attention and cognitive processing deficits, in players who had been diagnosed with concussions and were cleared for return-to-play. Surprisingly, the team also found significant delays in cognitive processing for players whom were not diagnosed with concussions at any time during the season (sub-concussive effects).

This work emerged from an on-going Canada-U.S. collaboration between neuroscientists operating out of the Health and Technology District in Surrey, British Columbia, a science and innovation community, together with Mayo Clinic Sports Medicine Center in Rochester, Minnesota. Through a consortium of initiatives and technologies known as BrainNET, the Health and Technology District has designed a clinical-academic-innovation network dedicated to bringing advances in neuro-technologies to individual improvements in brain health.

Dr. Ryan D’Arcy, the Health and Technology District’s co-founder, SFU professor and the study’s senior author, describes the study as an important step forward in concussion evaluation and treatment management.

“Sports-related concussion is a major topic of discussion amongst scientists, clinicians, the medical community, the sports industry and various governmental agencies. There is growing concern that concussions may be associated with an increased risk of persistent cognitive and mental health impairments later in life,” says Dr. D’Arcy.

D’Arcy points out that despite dozens of clinical studies examining sports-related concussions, there remains a major gap in terms of objective, physiological measures of brain function that can be easily deployed and readily used at point-of-care.

According to Shaun Fickling, the study’s lead author and a Ph.D. student at SFU, “What’s even more surprising is that not only did we find undetected physiological impairments in players diagnosed with concussions who were cleared to play, we also found that players who were not diagnosed with concussions showed decreased cognitive processing speed post season – thought to be the result of repetitive ‘sub-concussive impacts.’”

Dr. Aynsley Smith, Ph.D., sport and exercise psychologist and concussion investigator at Mayo Clinic Sports Medicine, adds:  “Mayo Clinic has been on the forefront of research into the prevention, diagnosis and management of concussion in ice hockey. We recognized the need to move beyond subjective concussion diagnoses that relied on questions — that players could deny or exaggerate — to more objective measurements. This is why we were pleased to collaborate in this study.”

Dr. Michael Stuart, M.D., professor of orthopedic surgery and the co-director of Mayo Clinic Sports Medicine, further explains, “Concussion in sports, especially in ice hockey, is a global public health issue with an estimated 1.6 million to 3.8 million sport-related concussions occurring per year in the United States alone. There is a growing urgency to develop practical approaches that use objective, physiological measures, which are also rapidly and easily deployable in sport and clinical settings so medical staff can better diagnose and treat concussions.”

The research team monitored and tracked 47 Tier III, Junior A, male ice hockey players over two seasons, and divided the players into two groups: players who were diagnosed with concussions and players who were not. They used brain vital signs to conduct assessments at baseline, post-injury, return-to-play, and post-season time points.

In contrast to conventional, lengthy and cumbersome EEG methods that generate event-related potentials (ERPs), brain vital signs extracts these physiological measurements in less than 10 minutes and is easily and fully deployable within a variety of sporting and clinical settings.

The brain vital signs framework measured three core, well-established ERP brain responses: the N100 for auditory sensation; the P300 for basic attention; and the N400 for cognitive processing. The amplitudes and latencies for all three responses are converted to standardized scores through normative transformation to produce a total of six brain vital signs measurements.

Financial support was provided by Mathematics of Information Technology and Complex Systems (MITACS, Grant #IT03240), Natural Sciences and Engineering Council Canada (NSERC), and Canadian Institutes for Health Research (CIHR) for this study. The research study was designed and carried out by the Mayo Clinic Sports Medicine Ice Hockey Research team, partially funded by USA Hockey and the Johannson-Gund Endowment.

About Brain: A Journal of Neurology:

Brain: A Journal of Neurology has published landmark papers in clinical neurology and translational neuroscience since 1878. The journal provides researchers and clinicians with the finest original contributions in neurology. Leading studies in neurological science are balanced with practical clinical articles. Its citation rating is one of the highest for neurology journals, and it consistently publishes papers that become classics in the field. Brain is published by Oxford University Press. https://academic.oup.com/brain

As Canada’s engaged university, SFU is defined by its dynamic integration of innovative education, cutting-edge research and far-reaching community engagement. SFU was founded more than 50 years ago with a mission to be a different kind of university—to bring an interdisciplinary approach to learning, embrace bold initiatives, and engage with communities near and far. Today, SFU is Canada’s leading comprehensive research university and is ranked one of the top universities in the world. With campuses in British Columbia’s three largest cities – Vancouver, Burnaby and Surrey – SFU has eight faculties, delivers almost 150 programs to over 35,000 students, and boasts more than 150,000 alumni in 130 countries around the world. www.sfu.ca

About Health and Technology District’s BrainNET:

Close Menu
Get In Touch